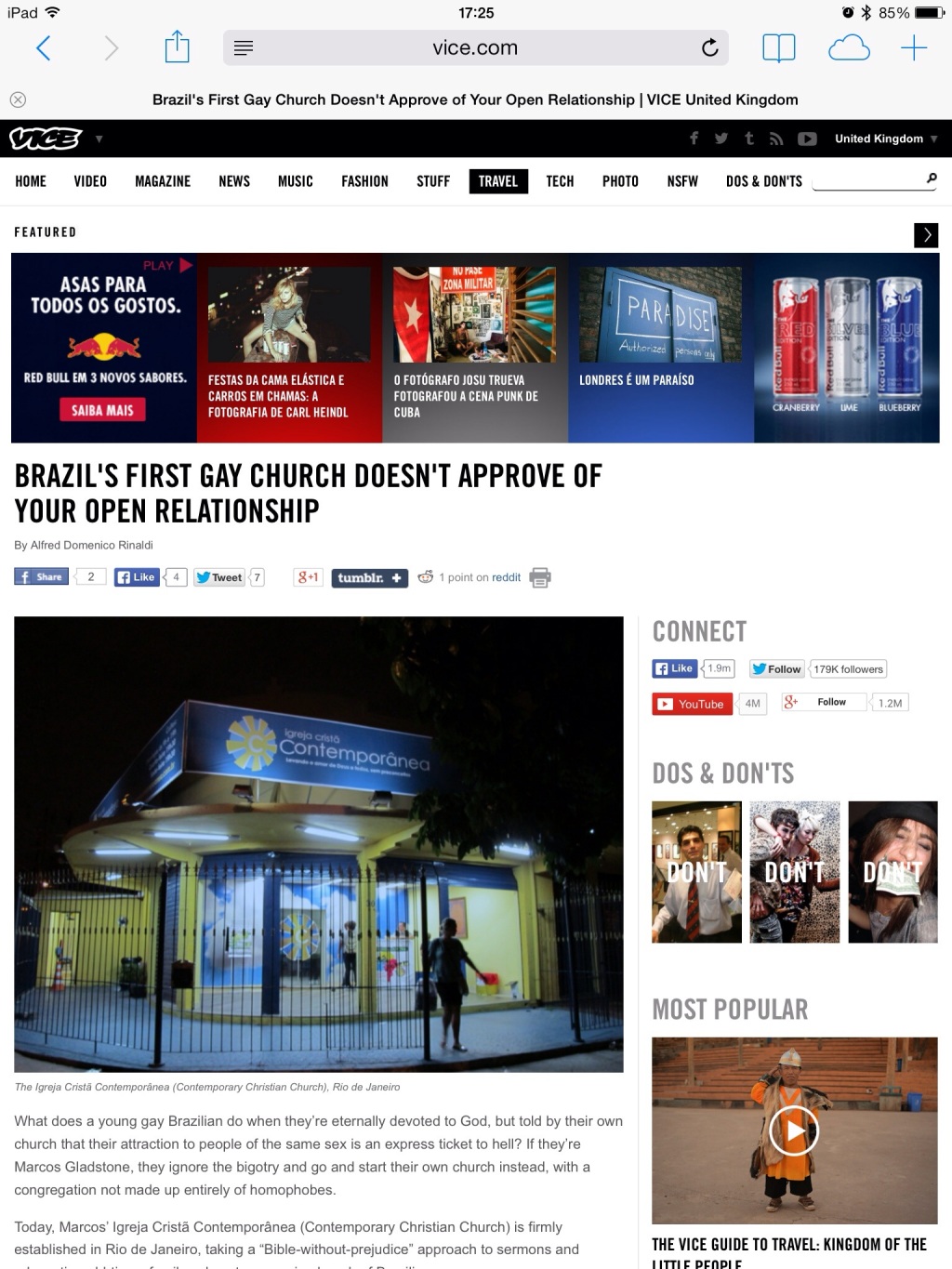 Evangelism is huge in Brazil – and it hates gays. Or does it? Marcus Gladstone has started the country”s first gay evangelical church.

What does a young gay Brazilian do when they’re eternally devoted to God, but told by their own church that their attraction to people of the same sex is an express ticket to hell? If they’re Marcos Gladstone, they ignore the bigotry and go and start their own church instead, with a congregation not made up entirely of homophobes.

My first encounter with Marcos’ house of worship was an advert on the inside of Rio’s premier gay magazine, nestled in next to rent boy ads and phone numbers that supposedly offered home deliveries of Viagra. “That’s our gay church,” said my friend. “They’re really pissing off mainstream Christians.”

A few days later, I’m surrounded by an ecstatic singing crowd, belting out religious anthems at one of Marcos’ services. So far, everything is as it should be at a pentecostal God-fest. There are the rousing anthems about mastering life with the aid of the Almighty; lots of clapping; tears and quivering lips; sermons about traditional holy stuff, like gratitude; interjections (“Amen!” – “That’s what I’m talking about!” – “Oh yeah, baby!”); and credit card machines on the literature table.

All of this surely pleases the Creator, but what would he make of the two men singing arm in arm? Or the distinctly butch female lead singer? Or Pastor Marcos, who shares his bed with a partner of the same gender?

“God loves all of us equally – he holds no prejudice,” explains the pastor in his ofﬁce. Dressed in a smart suit, the 37-year-old herdsman looks every inch the successful lawyer – which he is. “What the Bible condemns is sinful behaviour, such as drunkenness, drug-taking and promiscuity. But for a man to love another man, and be faithful to him – or a woman to love another woman, and be faithful to her – is not a sin in the eyes of the Lord. You can read all about it in our pamphlet, ‘The Bible Without Prejudice’,” he explains.

“But isn’t it a bit deluded to bend the good book to your will?” I ask. “Why not just admit it: more or less all religions are homophobic.” Pastor Marcos has his answer ready. “The Bible isn’t homophobic, in the same way that it isn’t racist or misogynistic,” he says. “In the past, the Bible was used to justify slavery and the oppression of women – but we don’t read the Bible that way any more. And when it comes to gays and lesbians, it’s time to stop pretending that the Bible is homophobic, because it isn’t – it only condemns promiscuity, regardless of sexual orientation.”

If that’s the truth, it seems that a good deal of Marcos’ brothers and sisters in Christ haven’t realised it yet. While the Vatican might have softened its line slightly since Pope Francis was elected last year, most evangelical churches still take an uncompromising stance.

“Other evangelical churches say that we are of the devil,” says Marcos. “They’re so worked up about us that we had to start hiring security at some of our services. But this won’t deflect me [from my mission]; it’s a pleasure suffering for this cause.”

Pastor Marcos speaks quietly and gently, always with a little smile around his lips. “Lots of gay people have been hurt – hurt by their families, hurt by society, hurt by the church,” he says. “We are here to heal them with the love of God. Too often, gay people have no values – they only think of hedonism. Here, we offer an alternative vision. We advocate family values – gay marriage and gay adoption.”

I ask if that means no sex before marriage.

“Of course not,” he replies, smiling, hardly letting me ﬁnish the question. “Sex outside marriage is totally ﬁne. You can’t expect to marry someone with whom you haven’t got that intimate bond.”

And what about open relationships – are they legit?

“No,” he answers. I’ve clearly exhausted the man’s reservoir of tolerance. “For us, what isn’t condemned by God is a relationship of love and ﬁdelity between only two people, whether they are of the same sex or not.”

Pastor Marcos has married his husband four times already, re-tying the knot as soon as any upgraded gay marriage legislature is passed in Brazil. Together, they’ve adopted two sons, Felipe, 10, and Daveson, 11.

“It’s easy for gay people to adopt  in Brazil, but people only want white babies,” he says. “Kids of colour, and even white kids older than two, stay on the shelf. So we gay people have a lot to give.”

Aside from promoting adoption and giving hands-on parenting advice, the church also works with an orphanage for HIV-positive kids, an nursing home and a local favela. But the pastor and his followers still have a long way to go before Brazilian society fully accepts lesbians and gays. This January, for example, 17-year-old Kaique Batista dos Santos was murdered for being gay. Despite the fact he’d had his teeth pulled out with pliers, authorities allegedly first recorded the incident as a suicide.

Meanwhile, in Brazilian parliament, an evangelical congressman is advocating a “gay cure” paid for by the government. His reasoning is that being gay is an illness, and that everybody should have a right to treatment – to become healthy and straight.

As I leave the congregation behind and head for the local gay bar, I can’t help but think how much I’d hate it if Pastor Gladstone’s creed of ultimate morality took over completely. But in a world of gay-hating skinheads with pliers and homophobic preachers calling for gays to be “cured”, I thank the Lord that he’s around.

iThere are no comments

Begin typing your search above and press return to search. Press Esc to cancel.